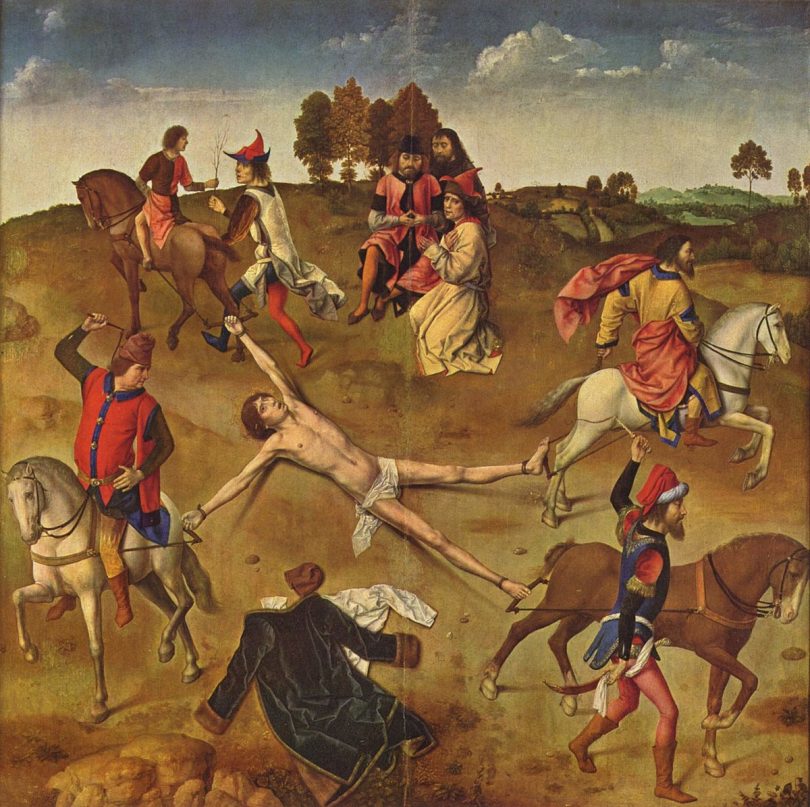 What an awful way to go. This method was primarily used in Southeast Asia and India. If you were found guilty of a crime, Elephants owned by royalty would crush you to death. If you were lucky, they would stomp on your head and you’d go out rather quickly. However, if you weren’t as fortunate, they would have the elephants dismembered you with their trunks. Terrible. Don’t fear, though. Sometimes if you could fend the elephant off, you were set free.

This method was used in the United States in the 19th and 20th century. It was implemented to replace hanging’s, And how they did it is that they had a system of weights and pulleys that were used to violently jerk the person up into the air. It was found to not be very efficient at breaking the neck and the method was discontinued in the 1930s. However, a method of this is still being used today in Iran. They use cranes to accomplish the same effect.

this method used a large cauldron or a sealed kettle. Various liquids were used such as water or oil. Sometimes you’d be placed into the liquid and then it’s heated afterwards. And other times they preheat the liquid to a boiling point and the executioner would raise and lower the person into the boiling liquid to prolong your life. How this would kill you is that the heat would destroy your skin and then break apart your muscle and finally your arteries. Now, death by boiling has been made illegal for a very long time, but some people report that it’s still being used in Uzbekistan.

This was used in various parts of the world, but most prominently in Assyria over 1000 years ago. This method of execution removes all of the skin from your body. Usually they would try to keep all of your skin intact in one piece. How creepy. One Assyrian king fastened the skin of rebel leaders to the city walls and gates as a warning to would be rebels. The cause of death would usually be shock, bleeding to death or infection. And yes, I did say infection because sometimes people would live for days after being flayed.

Buried Alive, this one rivals dismemberment as the ultimate mindfuck. As far as executions go, it was known as the execution of shame. It was used by Germanic tribes for shameful crimes such as cowardice or sodomy. The Roman Empire also buried people alive for shameful crimes such as rape, infanticide and theft. Usually people would die within about one to two hours due to asphyxiation.

This one was done in a few different ways. But the most disturbing way is when you were hung upside down by your ankles and sword in half starting at your genitals. What’s really disturbing about this is that they didn’t hang you upside down, just a saw easier. They hung upside down so the blood would go to your head and keep you alive longer. Awful, completely terrible.

This one was invented by Ananthaswamy, an artist. It was a hollow life sized bull made of bronze. The head of the bull had a horn so that when people were inside of it in trying to get fresh air, their screams going through this horn sounded like a bull. The guy that had this thing, he was a complete and utter tyrant and an asshole. The inventor was presenting it to him and HE said, Go ahead, go inside the bull. I want to know how the horn sounds whenever people blow through the horn.

So as soon as the artist gets inside, he has it slammed shut in. The guy is baked to death by his own invention. Justice came, however, whenever Flair’s was overthrown because rumor has it that he was a victim of the bull himself.

Horror Movie Character That Are Not As Scary

Wow, what a terrible way to go. And I imagine to be incredibly painful, depending on the circumstances now, people were burned in mass in the history, which means that a lot of people were burned at the same time, at the same stake. And whenever that would happen, people would often die, not due to the flames burning their flesh, but due to carbon monoxide poisoning. Seems like a rather peaceful way to go as opposed to the flames. Now, whenever it was just one or two people or just a small amount of people, then, yes, they did typically burn alive. Awful, terrible way to go.

OK, this would be my least favorite way to go. Dismemberment is the act of removing your limbs from your body. Various methods have been used, such as fastening your ankles and your wrists to four separate horses that would then go in their own opposite directions. This would rip you to pieces and maybe some people thought that horses didn’t have enough power. So another way that they would execute you is that they would fasten you to four separate ships that would sell in their own direction, ripping you again into pieces. Another, more creative way of killing people. The Romans would bend to trees over, fast them to your ankles, release the trees, which would rip you in half. There are many other examples of dismemberment in history, but there’s no way I could list them all. Apparently, people are very creative when it comes to ripping the human body to pieces.

now there are a few cases of this in recorded history, but not too many due to the cost prohibitive nature of the execution. Mithridates, the 6th of Pontoise, captured Roman General Marcus Licinius Crassus and poured gold down his throat. Now he was killed because his father was a tax profiteer, and it was thought at the time that many us would follow in his father’s footsteps. So that was put to a rather brutal end.

did not begin with the Romans, but it was a method of execution that had developed centuries earlier in the ancient near East. The Medes and the Persians practiced this gruesome torture method as well as the Carthaginians and the Egyptians, and later it was adopted among the Greeks and finally the Romans in the first century. Crucifixion was mentioned in history from about the 6th century BC to the 4th century AD.

In 519 BC Darius I, king of Persia, crucified 3,000 political opponents in Babylon;