Home » The Most Ridiculous statements from Kanye West 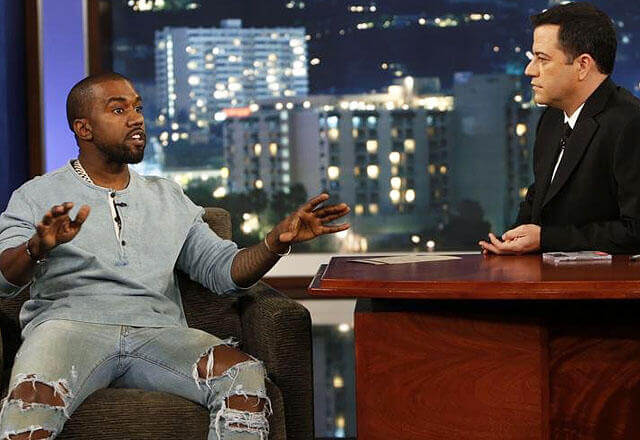 Kanye Was Already Angry Because Of A Previous Skit, And He Used The ABC Domestic Television Platform To Have A Man To Man Discussion About Igor, The Fashion World, And His Public Image.

It’s A Revelling Interview, That Shows How Kanye  Sees Himself, But It’s Also A Train Wreck, Especially When Kanye Compares Himself With Jesus And Reminds Everyone That He Is A Quote Creative Genius.

Check out the most ridiculous quotes from the interview below,

On his angry phone call to Kimmel: “When I saw the skit — which I didn’t even watch all the way through, because I didn’t want to be infuriated — I said … well, this is the one person I know, so I can go and let out everything that I feel about every single bogus weekly cover, every single bogus skit, every single rumor in barbershop, everything that people feel is OK to treat celebrities like zoo animals or act like what they’re saying is not serious or their life is not serious or their dreams are not serious.”

On his creative abilities: “For me, I’m a creative genius, and there’s no other way to word it. I know you’re not supposed to say that about yourself, and I say things the wrong way a lot of times. But my intention is always positive.”

Correcting Kimmel’s use of the term “rap beef”: “I wouldn’t even say that I’m a rapper. I’d say I’m more of a messenger than a rapper.”

On his radio interview that Kimmel spoofed in the skit that started their feud:“If you guys look at the Zane interview, it’s really something extremely fearless for someone in my position to do, because most people just bow down to TV. … I could care less about any of these cameras, in all honesty. All I care about is my family.”

Responding to Kimmel’s claim that it’s “weird” to describe oneself as a genius: “I’m totally weird, and I’m totally honest, and I’m totally inappropriate sometimes. And the thing is, for me to say I wasn’t a genius, I would just be lying to you and to myself.”

Responding to Kimmel’s question about whether he composes tweets on the toilet: “That’s when I think of the best sh–.”

On his Twitter rant directed at Kimmel: “I just thought it was so amazing that I was saying this in real-time, in real life, you know what I’m saying, with my position. … Just to completely wild out.”

About his use of Twitter in general: “I do everything I can to break media.”

On fashion: “Who do you know [that] is known more for clothes than me?”

Speaking About his haters:  Kanye said “It’s not about racism anymore. It’s classism. … Paula Deen, she was old school with it.”

On his school days: “Creatives have got beat up my entire life. And there’s moments where I stood up to drug dealers in Chicago and said, “You can’t have my publishing. Come and kill me. Do whatever you’re gonna do, but you’re not gonna bully me. You’re not gonna stop me, because my mother told me to believe in myself.”

On his idols: “This is what I’m here to do. So when I compare myself to Steve Jobs or Walt Disney, Howard Hughes, David Stern, Michelangelo, Da Vinci, Jesus or whatever it is, I’m saying, these are my heroes. These are people that I look up to. This is the type of impact I want to make on the earth.”

On getting harassed by fans and paparazzi: “Don’t ask me a question about something you saw in the tabloids. Don’t try to antagonize me. Because you know what? It’s not safe for you in the zoo. Never think that I’m not from Chicago for one second and think you can walk up and disrespect me and my family constantly.”

On wanting to foster a mutual respect with photographers: “You do help me get money, paparazzi. You show people how fresh my outfit is.”