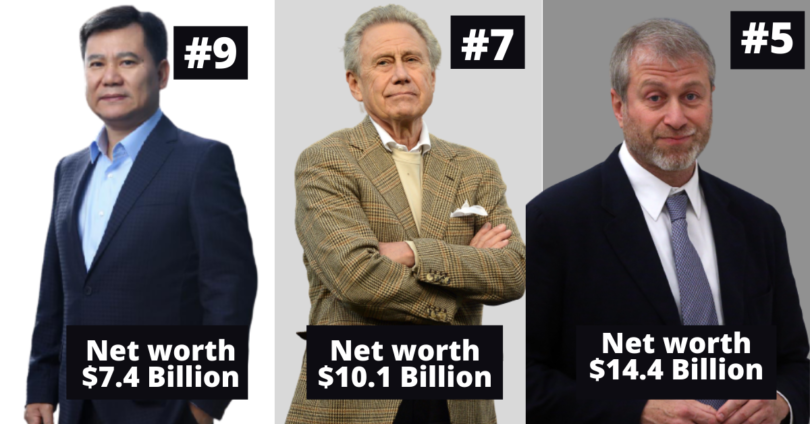 Top 10 Richest football club owners in the world. Newcastle United has finally been taken over by a Saudi Arabian-backed consortium after months of speculation.

The PIF’s involvement in the takeover was met with a great deal of criticism. The consortium, on the other hand, appears to have been able to successfully demonstrate that Saudi Arabia would not have control over the club, passing the Premier League’s litmus test.

Newcastle United the Richest football clubs in the world

Newcastle United has become one of the wealthiest football clubs in the world following the completion of the takeover. Fans were undoubtedly relieved to see Mike Ashley’s stingy ownership come to an end, and they will eagerly await the club’s return to glory. But where do the Magpies’ owners stand among the world’s wealthiest football club owners?

in the article, We take a look at the 10 wealthiest football club owners in the world.

Guo Guangchang is a Chinese investor and businessman. With a net worth of $6.5 billion, he is the chairman and co-founder of Fosun International Limited and the world’s 10th richest football owner.

Guo has been the chairman of Fosun Group, based in Shanghai and Hong Kong, since 1994. The conglomerate began with market research and has since expanded into insurance, pharmaceuticals and healthcare, property, steel, mining, retail, services, finance and other investment, and asset management, becoming one of China’s largest non-state-owned enterprises.
Wolverhampton Wanderers Football Club, a professional association football club based in Wolverhampton, West Midlands, England, was purchased by Guo’s Fosun International in July 2016 for a reported £45 million from the previous owner Steve Morgan.

Wolves went on to win the 2017–18 Championship title, returning to the Premier League after a 6-year absence.

Zhang Jindong is a billionaire Chinese businessman. He is one of the company’s founders and the current honorary chairman, based in Nanjing, Jiangsu Province.

His company also owns the majority of shares in Inter Milan, an Italian football club.
The club owners began investing heavily in the squad in 2019, appointing Antonio Conte as manager and signing players such as Romelu Lukaku and Alexis Sanchez.

After the Nerrazurri ended their 11-year wait for a Serie A title in 2020-21, the club reaped the benefits of their investment. However, the club ran into financial difficulties this summer, forcing Conte to resign as a manager and selling players like Romelu Lukaku to Chelsea football club and Achraf Hakimi.

His wife, Ann Walton Kroenke, is the daughter of Walmart co-founder James “Bud” Walton and owns the Nuggets and Avalanche franchises.
Kroenke first purchased Arsenal shares in 2008, then increased his ownership to around 62 percent in 2011.

At the Emirates, the American is not a fan favorite. In recent years, his lack of investment in the club has seen them struggle to compete at the top of the Premier League. He did, however, spend £150 million on transfers this summer, making Arsenal the window’s highest spenders.

Philip Frederick Anschutz is a billionaire businessman from the United States who owns or controls businesses in a variety of industries, including energy, railroads, real estate, sports, newspapers, movies, theaters, arenas, and music.
After working in his family’s oil drilling business, Philip Anschutz decided to pursue a career in sports.
The 81-year-old billionaire was a founding member of Major League Soccer and owned a number of teams, and he is one of the Richest football club owners. The LA Galaxy, Chicago Fire, Colorado Rapids, Houston Dynamo, San Jose Earthquakes, and DC United were among them.

Anschutz eventually sold all of his stakes in his other teams, keeping only a majority of the Los Angeles Galaxy.

When the LA Galaxy signed David Beckham in 2007, they became one of the most well-known clubs in America and gained international recognition. In recent years, they have also had Zlatan Ibrahimovic and Javier Hernandez on their roster.

He is one of the Top 10 Richest football club owners in the world.

Many ultras saw Agnelli as the “rightful” heir due to his family’s long association with the club, and Elkann had come under fire from Juventus fans for the club’s poor results during the 2009–10 season.

Despite taking over at a time when the club was still dealing with the fallout from the infamous Calciopoli scandal, he is credited with overseeing the transition to the new stadium and balancing the club’s finances in the face of Italy’s ongoing recession. One of his first acts as chairman was to appoint Giuseppe Marotta as Director of Sport and Luigi Delneri as new coach, both of whom came from Sampdoria.

On May 22, 2011, Agnelli appointed Antonio Conte, a former captain and fan favorite, as the new manager of Juventus, succeeding Delneri. In the same season, Juventus became the first team to win the scudetto without losing a game under Agnelli.  Since then, Juventus has won nine scudetti in a row, a Serie A record, including four Coppa Italia titles in a row since 2014–15, a record in the competition.

Agnelli resigned as chairman of the ECA and the UEFA Executive Committee in April 2021 to become vice-chairman of The Super League.

Roman Arkadyevich Abramovich is a Russian-Israeli businessman and politician worth billions of dollars. Abramovich is the majority owner of Millhouse LLC, a private investment firm, and is best known outside of Russia as the owner of Chelsea Football Club.
Abramovich purchased the companies that own Chelsea Football Club in West London in June 2003,make chelsea one of the Top 10 Richest football club in the world and Abramovich as one of the Top Richest football club owners.

Ken Bates, the club’s previous owner, went on to purchase Leeds United, the club’s main rival. Chelsea announced plans to build a new state-of-the-art training complex in Cobham, Surrey, and began an ambitious commercial development program with the goal of making it a global brand on par with footballing dynasties such as Manchester United and Real Madrid.

Chelsea has won 18 major trophies since his takeover, including the UEFA Champions League twice, the UEFA Europa League twice, the UEFA Super Cup once, the Premier League five times, the FA Cup five times (including the club’s first ever league and FA Cup double in 2010), and the League Cup three times, making them the most successful English trophy-winning team during his ownership, tied with Manchester United (who have also won 16 major trophies in the same time span).

Abramovich was chastised in 2021 for attempting to get Chelsea into the unpopular European Super League. The competition has been widely criticized for encouraging greed among the wealthier, larger football clubs, undermining the significance of existing football competitions. However, Abramovich pulled the club out of the new competition just two days later, followed by other English clubs.

Sheikh Mansour is an Emirati politician who serves as the UAE’s deputy prime minister, minister of presidential affairs, billionaire, and member of Abu Dhabi’s royal family. He is the half-brother of UAE President Khalifa bin Zayed Al Nahyan, and he is married to one of the daughters of Dubai ruler Mohammed bin Rashid Al Maktoum.
He also owns the Abu Dhabi United Group (ADUG), an Abu Dhabi royal family investment company that bought Manchester City Football Club in September 2008 making them one of the Top 10 Richest football club in the world. He immediately transferred all responsibility and ownership to Khaldoon Al Mubarak and the City Football Group, who have overseen the club’s transformation since then. For the first time since 1968, the club has won five Premier League titles; these are City’s first Premier League titles.
Major League Soccer of the United States announced on May 21, 2013, that its second New York City club, to be known as New York City FC, would begin play in the 2015 season and would be majority-owned by Mansour in partnership with brothers Hal and Hank Steinbrenner.

Dietrich Mateschitz is an Austrian business magnate who has amassed a fortune in the billions of dollars. He is a co-founder of the Red Bull energy drink company and a 49% shareholder.
Mateschitz encountered the energy drink Red Bull while on vacation in Thailand. Following its invention in the 1970s by businessman Chaleo Yoovidhya, the drink became popular among Thai workers.

Mateschitz became enamored with the beverage and contacted the Thai company’s founders as a result. He was willing to give them a 49% stake in the company in exchange for allowing him to tweak the formula and expand it internationally. His proposal was gladly accepted.

He took it all over the world, but the brand didn’t really take off until 1997, when it was launched in the United States.

Mateschitz put his money into sports, particularly Formula One, but he also dabbled in soccer. He bought SV Austria Salzburg in April 2005 and renamed it Red Bull Salzburg later that year,making them one of the Top 10 Richest football club owners in world. In May 2009, he founded RB Leipzig, which has since grown into one of Germany’s most powerful clubs.

Paris Saint-Germain is owned by the Qatar Investment Authority, the country’s sovereign wealth fund, and is led by Nasser al-Khelaifi.

When Al-Khelaifi was younger, he was a talented tennis player who competed in two ATP Tour events. Al-Khelaifi met Qatar’s Emir, Sheikh Tamim, through his tennis career.

Tamin, the head of the sovereign wealth fund, has entrusted his long-time friend Al-Khelaifi with a number of senior positions in his companies over the years.

It was created to diversify the country’s assets away from oil wealth and is estimated to be worth around £220 billion.
PSG was purchased by the group in 2011, and Al-Khelaifi was appointed Chairman and CEO of the club immediately,making him one of the top Richest football club owners.

PSG is highly rated as one of the Top 10 Richest football club in the world.

PSG has dominated the French League and even the transfer market since the takeover, bringing in megastars. In 2017, the club paid €222 million for Neymar, making him the most expensive player in football history. During the summer, they also managed to sign Lionel Messi on a free transfer.

PSG, like Manchester City, has yet to win the Champions League despite all of their spending.

It was founded in 1971 with the goal of investing funds on behalf of the Saudi Arabian government.
PIF led a consortium that bought Newcastle United Football Club in the Premier League in 2021,making them the Richest football club owners.

Human rights organizations have condemned the takeover. The other 19 Premier League clubs denounced the Saudi takeover of Newcastle, claiming it harmed the league’s image.
Newcastle United is now owned by the Saudi state’s investment fund after 14 years under Mike Ashley’s leadership, making them the richest club in world football by a long shot.
Newcastle fans can expect big spending in the transfer market after Ashley’s poor reign at the club, as the Gulf state is one of the richest in the world.